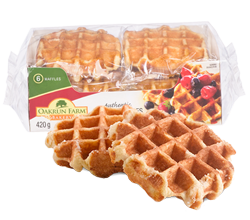 Whether you call them Wonuts or Waffuts – we can’t decide – this inspired cross between a waffle and donut is a delight for dessert lovers.

Ideal for the whole family.

To our valued consumers, due to ongoing supply chain issues we will be discontinuing our waffles. We apologize for any inconvenience this may cause. You can find other delicious Oakrun Farm Bakery favourites at your nearest supermarket, including our traditional English Muffins and Crumpets. We appreciate your business.

Step 1: Prepare Chocolate Frosting: Place chocolate chips in medium bowl. In a small saucepan, heat the heavy cream without boiling. Pour the hot cream over the chocolate chips and let stand for 5 minutes. Stir the mixture until it is homogeneous. Then whisk in the corn syrup and vanilla extract. Use the mixture immediately.

Step 2: Dip waffles in chocolate frosting, then sprinkle with toppings: coconut, chopped pistachios or walnuts, or sugar pearls. Leave to stand at room temperature for the mixture to set (at least 1 hour).

Step 1: Prepare the cinnamon sugar: In a brown paper bag, shake together the sugar and ground cinnamon.

Step 3: Toss the hot waffles with the cinnamon sugar and serve.